Manchester city council has hired a private security firm to patrol Chinatown and ‘deter’ drugs and anti-social behaviour problems, the M.E.N can reveal.

ShowSec, a company well-known for providing security at the Arena and events such as the Christmas Markets, was brought in earlier this month on a three-month ‘trial’ arrangement.

The council says the brief was to ‘complement’ police by providing ‘additional reassurance to residents, workers and visitors and support preparations for next month’s Chinese New Year’.

The ShowSec guards have no power of arrest and it is understood they are under instruction to call Greater Manchester Police if they witness any criminality.

They were initially patrolling the area between 6am and midnight, but those hours have been reduced to 8am to 8pm following a violent incident which unfolded last Friday evening.

It is understood there was a fight between rough sleepers which resulted in a man being stabbed with a broken bottle.

GMP said they were called at around 8.20pm and found a man with minor injuries.

Inquiries into the incident are ongoing.

It is understood ShowSec guards ‘withdrew’ to the nearby casino during the incident and were then ‘stood down’ by a supervisor ‘due to the heightened atmosphere and aggression.’

As a result, the patrols stopped over the weekend but resumed on Wednesday.

This morning the Manchester Evening News observed a group of four ShowSec staff wearing high visibility jackets walking around the area in pairs.

In the time we were watching, they did not engage anyone with anyone who was sitting on benches or gathering in groups.

Greater Manchester Police declined to comment around the appointing of ShowSec but said the city centre policing team is currently ‘working hard’ to tackle crime issues in Chinatown.

Superintendent Chris Hill said there are currently a number of operations including high-visibility patrols and undercover investigations ongoing in the area.

He added: “We welcome further collaboration from other agencies alongside the Council, and as we head towards Chinese New Year;  we will continue to provide support and assistance alongside our partners to ensure residents and the businesses operating within the area feel safe and secure.”

City centre spokesperson Pat Karney said the decision to bring in ShowSec was taken at a ‘private meeting’ with the intention of reassuring local residents that they could socialise in the area.

“Police have done as much as they can – but they can’t be there all the time,” said Pat.

“It was a particular problem – the elderly residents wanted to be able to use the pagoda and the benches.”

Opposition party the Liberal Democrats hit out at the security patrols, describing the arrangement as ‘a waste of time’.

Finance spokesperson Greg Stanton said: “This is just another example of reckless spending from Labour; we simply don’t have the kind of money to be fake-policing a car park – not when there are people sleeping on our streets.

“We are living through the worst homeless crisis in living memory and every penny spent on something other than tackling that should be properly scrutinised as to whether it’s an effective use of public money, and in this case, it simply isn’t.

“The council’s lack of transparency and behind-closed-doors deals are becoming very concerning and they must urgently answer basic questions like how much was spent on this waste of time.

“Who approved that? What precautions were put in place to ensure staff were not put at risk? A brush off response isn’t acceptable.”

The ShowSec patrols started on January 14 and involve groups of guards patrolling the area around the pagoda and NCP car park in Chinatown.

The arrangement was briefly halted on Friday night, after guards witnessed a violent incident unfold, the M.E.N can also reveal.

‘They are glorified parking attendants’

The move to appoint ShowSec comes after the M.E.N told last year how the historic neighbourhood has been beset by crime and anti-social behaviour problems which the community says is driving away business.

Restaurant owners complained the public benches were often filled with rough sleepers or people showing the effects of having taken drugs.

Dealers are frequent visitors to the area, they said, bringing with them occasional violent clashes over the ‘turf’.

The main pagoda, once the centrepiece of Chinatown, has remained fenced off behind metal railings for months, although council bosses hope to have it reopened in time for Chinese New Year celebrations on February 7-10.

Justifying the decision to bring in ShowSewc, the council said it is hoped the private security patrols will help ‘deter’ drug-related anti-social behaviour.

Deputy Council leader Councillor Nigel Murphy, lead member for crime and community safety, added: “We have listened to the concerns of residents and businesses about some of the drug-related anti-social behaviour which has taken place in this area leaving people feeling uncomfortable and, in some cases, intimidated.

“These patrols are intended to provide visible reassurance and help deter such activities.

“In partnership with Greater Manchester Police and others, we will continue to examine other options available to use to promote a safe and welcoming environment and support the community.

“This is being done on a trial basis. While it was briefly paused over the weekend while arrangements were refined, the presence will resume tomorrow.”

A council spokesperson said the cost of the ShowSec trial could not be disclosed due to ‘commercial confidentiality’.

However, the M.E.N estimates it is costing at least £500 a day based on a calculation of six guards being paid £7.50 an hour to patrol for twelve hours.

The council says the arrangement has been ‘welcomed by the community’, but when the M.E.N spoke to businesses this week there were mixed reviews.

“There were three guards at a time, sometimes five of them.

“There wasn’t as many people in the car park.”

Others in the Chinatown community were less impressed.

Jimmy Low, who runs Wing Fat supermarket, said the ShowSec guards were only patrolling the boundaries of the NCP car park and were not confronting those buying or selling drugs.

“Had I known about the limitations of this agreement I would have politely declined,” he said.

“The drug dealing and the drug taking was still happening in the back alleys.

“They said they had been instructed to maintain the car park boundary and they’d been told not to approach any of the dealers or the homeless.

“I don’t know what their job descriptions were.

“I’m hoping the council will consult with us on what we want now.

“We have said before that we would sponsor our own police officer but we never heard anything.”

‘We are working hard to tackle issues in Chinatown’

The latest data from the police.uk database shows there were 93 crimes reported in the patch which covers Chinatown in December, including 37 of anti-social behaviour, 13 violent or sexual offences, 11 drug offences and seven vehicle crimes.

In November there were 116 crimes reported and in October it was 96.

That is an increase of more than 25 per cent on last year. 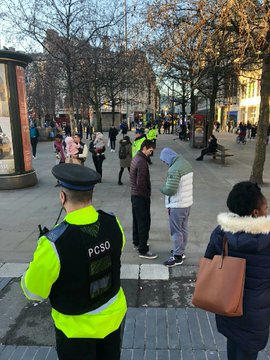 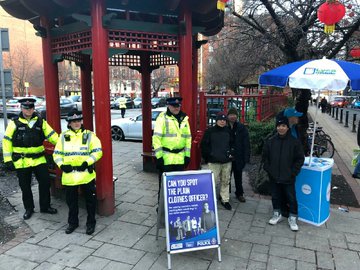 We carried out more unpredictable high profile deployments in the city this afternoon. Here the team were on Market St & in China Town supported by a specialist officers in this case from the Tactical Aid & Dog Units.

Superintendent Chris Hill of GMP’s City of Manchester team said: “We have listened to concerns from residents and businesses in Chinatown and are working hard to tackle the issues they are reporting to us.

“We currently have a specific operation aimed at tackling persistent drug-dealing and antisocial behaviour hotspots around Chinatown with high visibility patrols and undercover operations sending a clear message to those committing these offences.

““We also carry out partnership operations with Manchester City Council and officers from the substance misuse services to help refer those that need it to appropriate support and have created new ways of engaging with residents and businesses in the area, including attending local meetings, setting up drop-in sessions and sitting down with residents to hear their concerns and keep them updated.

“We welcome further collaboration from other agencies alongside the Council, and as we head towards Chinese New Year;  we will continue to provide support and assistance alongside our partners to ensure residents and the businesses operating within the area feel safe and secure.”